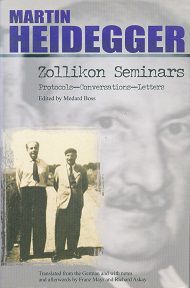 Long awaited and eagerly anticipated, this remarkable volume allows English-speaking readers to experience a profound dialogue between the German philosopher Martin Heidegger and the Swiss psychiatrist Medard Boss. A product of their long friendship, Zollikon Seminars: Protocols-Conversations-Letters chronicles an extraordinary exchange of ideas. Heidegger strove to transcend the bounds of philosophy while Boss and his colleagues in the scientific community sought to better understand their patients and their world. Boss approached Heidegger during World War II asking for help in reflective thinking on the nature of Heidegger's work. A correspondence ensued, followed by visits that soon became annual two-week meetings in Boss's home in Zollikon, Switzerland. The protocols from these seminars, recorded by Boss and reviewed, corrected, and supplemented by Heidegger himself, make up one part of this volume. They are augmented by Boss's record of the conversations he had with Heidegger in the days between seminars and by excerpts from the hundreds of letters that Heidegger wrote to Boss between 1947 and 1971. For the first time, Heidegger makes the fundamental ideas of his philosophy accessible to nonphilosophers. Heidegger confronts certain philosophical/psychological theories, including Freudian psychoanalysis, Ludwig Binswanger's and Boss's forms of Dasein (existential) psychoanalysis, and Indian philosophy that he has never previously addressed. The lectures, correspondence, and conversations span twenty-five years, offering an ongoing view of Heidegger's career and philosophical development. A richly detailed picture of one of the century's great philosophers, Zollikon Seminars is the best and clearest introduction to Heidegger's philosophy available. Sobre o autor: Martin Heidegger (1889-1976) is one of the most influential twentieth-century philosophers. Among his many works are Being and Time and Parmenides.