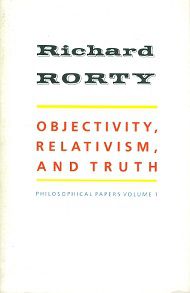 This is the first of two volumes of papers written during the 1980s by one of the most provocative and stimulating philosophers active today. The volume is divided into three parts. In Party I Rorty sets out an antirepresentationalist account of the relations between natural science and the rest of culture, arguing that science is a matter not of discovering a “true”, “objective” reality independent of mind and language but rather of acquiring habits of actions for coping with reality. In Part II Rorty explores the work of the contemporary philosopher who he thinks offers the best account of objectivity and truth – Donald Davidson. Part III extends these pragmatist views into politics by discussing the needs of a democratic society. Fundamental to Rorty’s project is the hope that problems about realism and antirealism, for so long central to English-speaking philosophy, will become obsolete. He wants questions about mind-independent and language-independent reality to be replaced by political questions: How free and open is our community? Are we sufficiently sensitive to outsiders who are suffering or have new ideas? The papers in the second volume, Essays on Heidegger and Others, discuss “Continental” thinkers who have abandoned the representationalist problematic and broken new ground.