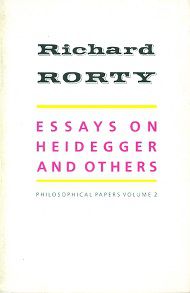 Essays on Heidegger and others - Richard Rorty

In the second volume of his recent philosophical papers, Richard Rorty focusses on the work of Heidegger and Derrida. Part I comprises four papers on Heidegger, Part II three papers on Derrida together with a pendant piece which discusses the use to which Paul de Man and his followers have put certain Derridean ideas. Rorty views the Nietzsche-Heidegger-Derrida Tradition (just as much as the Dewey-Wittgenstein-Davidson tradition considered in Objectivity, /relativism, and Truth) as culminating in a set of antiessentialist, antirepresentationalist, pragmatist doctrines. However, he is critical of Heidegger and Derrida when they treat language as a brooding presence, rather than (as Davidson remind us) strings of marks and noises emitted by organisms and used by them to coordinate their behavior. Rorty argues that there is no tension between these two traditions except at those points where Heidegger and Derrida became quasi-metaphysical. The third part of the volume is more miscellaneous, varying from a discussion of Freud and moral deliberation to the social theories and political attitudes of Habermas, Unger, Castoriadis, and Foucault.