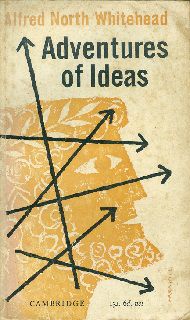 Professor Whitehead sets himself to consider critically the part player by ideas in the life of humanity. The examples which illustrate his theme are taken mainly from history, science and philosophy: Part I (Sociological) traces the development in Western thought of the ideal of freedom, Part II (Cosmological) considers man’s differing views on the nature and origin of the universe, Part III (Philosophical) gives an account of some important metaphysical notions, and in Part IV (Civilization) the earlier discussion is extended and applied to the realm of practical questions. Taken as a whole, the book attempts to convey a deeper understanding of what true civilization is, and how civilized beings arise.